skip to main | skip to sidebar

Just a short post to wish you all a very merry Christmas, and a happy New Year.

We've been busy packing over the last few weeks in the hope we will be able to move home in the late January or early February.

Today we went to the garden centre near to where we live to see Santa Claus arrive by helicopter. You can see some more pictures of Santa, Joshua and myself by clicking here.

Well, what a week this has been.

After suffering from the remnants of my cold over the weekend, Monday got off to a really bad start when, without being fully with it, I half filled up my diesel car with petrol. This was followed by two hours sat at the petrol station waiting for a tow truck, followed by a rather hefty bill to get the petrol removed......

Tuesday went better with a business meeting in Leicester - so more time spent driving than 'working', and on Wednesday I spent much of the day in London.

Tuesday also got interesting because after several weeks without any houses coming up for sale that we liked, the very first house we had looked at (long before we had a buyer) suddenly came back on the market.

Friday morning saw us revisiting the above house, and we both instantly knew this was the house we wanted.

We have an offer accepted, so hopefully next week we will start to get a picture of when things might happen. 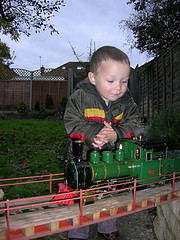 I've added some pictures to our flickr from the steam up day at Debbie's mums house on Nov 11th.

Various people associated with Fairfield bought their model trains along and ran them on the track in the garden.

Joshua love the trains, and will no doubt expect to see them every time he goes to visit Nanny.

See all the pictures here.

Hey everyone, look at my new hat. I wore it all the way to school when we picked up Toby this afternoon. I look just like my friend Santa Claus.

I went to see Delirious at the Reading Hexagon on Wednesday. The concert was excellent, sold out, and had a fantastic atmosphere...... 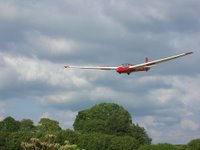 I've added a few gliding pictures to our Flickr album. View them by clicking here. 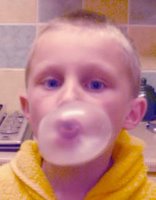 After 13 weeks on the market, we accepted an offer on our house at the weekend. The search is on to find a new home....
Posted by Graham, Debbie, Toby & Joshua at 9:43 pm No comments:

Toby and the helmet 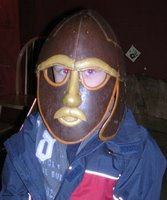 This is me when I went away with Mum & Dad at the weekend. We learnt a lot about Anglo-Saxons. This is me wearing an Anglo-Saxon helmet.

Joshua and the puddle 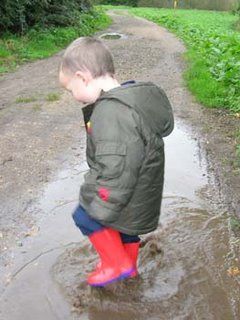 I had a great time sploshing in puddles when I went away with mummy, daddy and Toby. 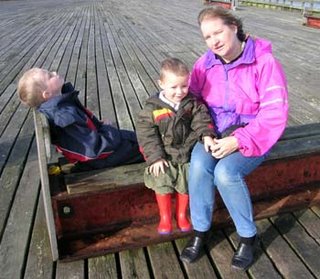 We spent the weekend in East Anglia - mostly in the rain :-)

On Saturday we visited Walton-on-the-Naze, a small seaside town where I had helped run a children's holiday club as a student in late 1980's. After 20 years there wasn't that much I recognised, but the pier and the Naze Tower hadn't changed much.

Here's a picture of us sitting at the end of the pier.

We spent Saturday night in Harwich, a busy container port on the Thames estuary. 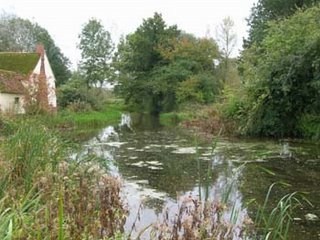 On Sunday morning we travelled to Flatford Mill. This is where John Constable (1776 - 1837) painted a number of his famous landscape pictures - his parents living in the village.

The picture in the left shows where 'The Hay Wain' picture was painted. The hay wain has gone, of course, but the cottage shown in his painting is still there.

Most of the trees there today were not there when he painted his pictures, but it is easy to recognise many of the places he made famous. 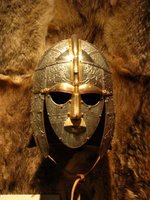 On Sunday afternoon we visited Sutton Hoo, the site of an Anglo Saxon cemetery where a 7th century ship was burried. The site contains a number of burial mounds which were excavated from tthe 1930's onwards. The most famous one contained the remains of what is believed to be King Raedwald of East Anglia.

Also found at the site is the helmet, shown reconstructed here.


From Sutton Hoo we moved onto Mildenhall where we spent our final night.

On Monday we visited the recreated Anglo-Saxon village at West Stow Country Park. A number of people were dressed up as Anglo-Saxons, cooking, weaving and working metal just as would have taken place in Anglo-Saxon times.

A blog is born

So here we are, the first entry in the Essex Family blog. Hopefully we'll find the time to keep stuff up to date and let you know what we've been up to.

Tomorrow we're off to Suffolk for the weekend, so this may well be the subject of our next entry.